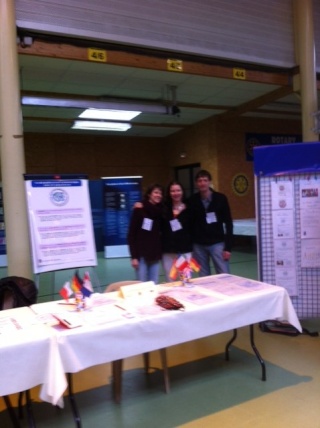 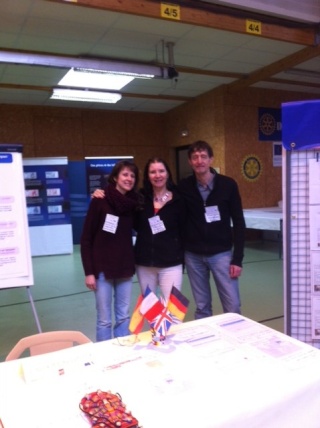 I was in Bethunes yesterday with Paola and Muriel at the 2nd salon des Langues where the Café polyglotte of Calais, and the Café polyglotte on the net ( or Forum des Langues)  were invited. Regularly now for each event of this kind, we are asked to show up. There are other polyglot cafés  elsewhere in the north ( and in the world, of course but I don’t know them) but I think the one of Calais is perhaps the most regular ( every Tuesday) . All this is thanks to Muriel, who tirelessly go here  and there, in every public building, at the university, everywhere, to make it known . We cannot speak of foreign languages in Calais now without thinking of the Café polyglotte .
Yesterday Muriel was there in Bethune  trying to convince the préfet of the Pas-de-Calais who showed up, and stand up a few minutes in front of our table, listening carefully to her explanations. In his speech afterwards he told the attendees how strange it was to spend years at schools studying languages and being unable to communicate when abroad (referring to his own experience  he was speaking of a waisted 8 years of german !  (I told myself ! should he have known a café polyglotte !) ) and he told us we were all working for Peace. These few words were enough to make this all day spent in Bethunes, meeting very nice people  a true success ! Thank you Muriel for involving me in the experience, I really hope the people I gave your little cardboard about the forum on the internet will be able to make the most of this wonderfull and great tool…  and subscribe !

Thanks Jean-Pierre ! I cross my fingers our efforts won't remain useless !