A Big Advocate of French in New York’s Schools: France by Kirk Semple

A Big Advocate of French in New York’s Schools: France by Kirk Semple

In the fugue of tongues on New York’s streets, French has never been a dominant voice. And as surging numbers of Asian and Latino immigrants continue to tip the balance of foreign languages toward Chinese and Spanish, the idea of learning French, to some, may seem kind of quaint, even anachronistic.
Yet in the city’s public school system, the French dual-language program, in which half the classes are in French and the other half in English, is booming

Re: A Big Advocate of French in New York’s Schools: France by Kirk Semple

Another article on the subject, by Forbes 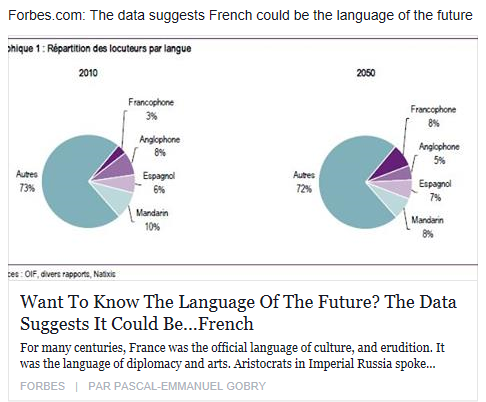 Want To Know The Language Of The Future? The Data Suggests It Could Be...French

For many centuries, France was the official language of culture, and erudition. It was the language of diplomacy and arts. Aristocrats in Imperial Russia spoke French, even amongst themselves, as Tolstoy and many others documented. In short, if you wanted to be educated, you had to speak French.

Things have changed a lot since then. With the decline of France and the rise of the Anglosphere, English is now the world’s lingua franca. But French remains an official language in many international institutions, from the UN to the European Union to the Olympics Committee (founded by a Frenchman), and learning French still retains some cachet.

French may be a beautiful language, but few would argue it’s the most useful, and almost nobody would argue it’s the language of the future. John McWhorter spoke for many when he wrote an immediately viral piece titled, “Let’s Stop Pretending That French Is an Important Language,” attacking New York City’s bilingual education programs.

Here’s the thing: the data suggests that French language just might be the language of the future.