First of all, national football confrontations are only a game that must remain in the playful domain, neither political nor financial, but to give pleasure to the spectators in order to distract them without getting into a fight. It is therefore up to the commentators to give the keys to "decipher" the tactics of the coaches, the "skill" of the players in order to avoid an instinctive reading that could lead to outbursts of the type "we're going to crush you! "or "you suck! "In short, explain the game.

Then that "the best man wins", that we should be happy about this fact, that it is not enough to align "stars" to make a "beautiful sky". Yes, because to admire a milky way you need stars, but you also need good luminosity, a good location, and to be yourself in the "zenitude" required to receive this "beauty".

So the French team lost, because the others were better that day. Better collectively (with an extra soul in the union - a philosophical wink) and better in tactics (the role of the coach) and above all being "hungrier" for a victory.

Let's thank them for the show that evening. To the 52 players of the two teams, their coaches, their trainers and all the little hands (cooks, physiotherapists, ticket agents, cameramen, sound engineers and all those anonymous people) who allowed us to enjoy ourselves.

But beware, we are not "oxen", "boffins", they are not "bread and games" (I add for many "beer") that will make us forget that we live in difficult times: pandemic, global warming, pauperization of a majority of the planet and that all this calls for a "differentiating union" rather than a nationalistic confrontation. "United we will overcome with a common goal that surpasses us.
Long live football and may the best team win, but let us remain united in and for humanity.

What does football teach us.

There are two phrases often quoted in sport, both of which I disagree with ! ( probably because I am not sporting enough. )

Firstly, " May the best team/man win. " I have to put aside my interest in languages as this is an incorrect phrase. As it is usually between two teams/people the correct phrase should be " May the better team win " but nobody, nobody ever says that. I am afraid I cannot say " may the best team win " when I know the repercussions of a defeat on my team, financial or otherwise can be extensive. Rarely do I have the opportunity to say may the best team win, and then I say it through gritted teeth.

Secondly, there is the phrase " it is not the winning but the taking part that counts " . My phrase would be " it is not the winning but the competing that counts. " All sports people know you cannot win every time. This was illustrated a while ago when in the U.K.'s most arduous horse race , the Grand National, a lady jockey" took part " by just staying at the back all the way just to be the first female jockey to ride in the race. In my view this does not count. I believe a female jockey ( plus horse ! ) actually won the race this year ! That really counts !

I also know a minister who bases one of his sermons on you should never have a winner as that means that there must be a loser ! Commiserations to France and especially the player who missed his penalty kick. Mind you, it doesn't look that difficult does it ! johnB

Rep : what does football teach us... 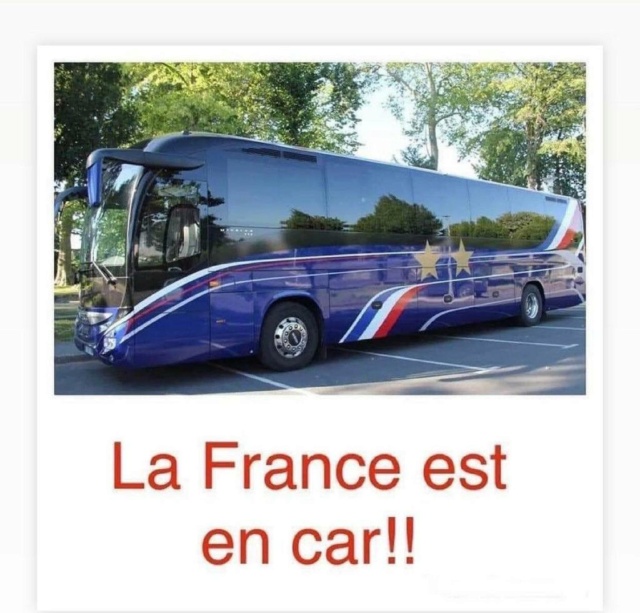 What does football teach us.

Thank you for the photo which made me smile a lot. There is an expression in football - " They came and parked the bus. " Understood now but not said " in front of their goal. " It means they kept all their players in defence and did not try to score a goal at the other end.
The agony for me of supporting a team begins all over again very shortly, with the first league game on August 6. The players have already reported back for Covid tests before pre-season training begins next week. We should do better next season as we have a new manager born in …. Strasbourg ! johnB.

So many meanings for that expression ? Very interesting indeed. What a strategy it requires to play football.