Mine was just fantastic, I've did it twice during the weekend.

First, it was from friday evening to saturday...maybe 11pm, with a friend in a pub called "L'irlandais" in Lille.

The second one was in one of my others friends house, we were three and we had 10 l of beer...

I was drunk as an Irish!!

Actually, I'm a very bad singer, I prefer playing the guitar or something like that!

Why do you want me to sing in an Irish pub song?

Because you have just said that yesterday you were drunk as an Irish . It helps to sing an Irish pub song.

Oh yep, but I wasn't singing, I use to have a great selfcontrol for this (I think that you will enderstand what I mean but it seems to me very bad neewbie speaker english, damnt')

In vocable I have just read interesting things about Ireland. Here there are. If you want to add more things it would be great ! On saint Patrick's day there are a lot of festivities going on in Ireland because saint Patrick is their patron saint.This man brought christianity to that country and they celebrate him on march 17th with parardes, drinking, singing etc. Guiness of course is the beer you have to choose. A clover is a little plant with 3 leaves which represents the Trinity because Ireland is a christian country. On saint Patrick's day people wear green clothes and clovers which they call shamrocks (Ireland's symbol). Green is everywhere and you will find even food and drinks tyed green. In cities with important irish communities you will also find green in the streets : New york city for exemple. People dress up as leprechauns ( like the character of Rumplestiltskin who weawes gold) The leprechaun usually sits on his pot of gold at the end of a rainbow.

Molly is a typical irish name and Moly Malone is Dublin's Symbol. There is a very well-known irish song called Moly Malone.

The song tells the fictional tale of a beautiful fishmonger who plied her trade on the streets of Dublin, but who died young, of a fever

I think it is a sad but lovely song. Here are the lyrics:

In Dublin's Fair City
Where the girls are so pretty
I first set my eyes on sweet Molly Malone
As she wheel'd her wheel barrow
Through streets broad and narrow
Crying cockles and mussels alive, alive o!

She was a fishmonger
But sure 'twas no wonder
For so were her father and mother before
And they each wheel'd their barrow
Through streets broad and narrow
Crying cockles and mussels alive, alive o!

She died of a fever
And no one could save her
And that was the end of sweet Molly Malone
But her ghost wheels her barrow
Through streets broad and narrow
Crying cockles and mussels alive, alive o!

Hi, Bob ! This is very nice. I like the lyirics. I'd like to hear the music.
If you come to the barbecue in June, why not take the CD with you ,,

Sorry Muriel, I just realized there was your message and music upwards. Thank you ! I hadn't seen it !!

Yes I am planning to go to the barbeque party in Calais again this year along with some friends from the London area and rather than bringing a CD along I offer to sing the "Cockles and Mussels" song myself or alternatively I may try to persuade one of my friends to sing it instead!!

If you could do that it will be great

Let's go back to Ireland. There is an expression "To have the luck of the irish" In fact it means the opposite because Ireland has suffered many hardships". Many times in history they have been unlucky
For instance there was a great famine when 1 million people died and 1 million emigrated from Ireland

In 1800, some five million people lived in Ireland. By the autumn of 1845, when the Great Famine struck Ireland, there were more than 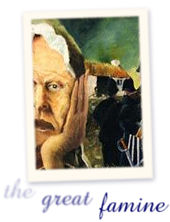 eight million. Many of them were wretchedly poor, eking out a precarious living on tiny plots of land, and dependent on each year's potato crop Hunger was no novelty to peasant families, for there had been partial failures of the potato crop in other years. However, these had always been of limited duration, and confined to a small number of counties. The Great Famine lasted from 1845 to 1848, and crop failure affected the whole island.
<p>The cause of the famine was a fungus disease which made the potato plants to rot in the ground, giving off an appalling stench. The blight first destroyed crops on the eastern seaboard of America in 1842, then appeared in England in the summer of 1845. In September, the counties of Wexford and Waterford reported the disease. More than half the Irish potato crop failed in 1845. Sir Robert Peel, the British prime minister, appointed a commission to investigate the problem, but scientists were unable to explain the disease, let alone find a cure In 1846, the potato crop was a total failure.
Peel, to his credit, also introduced relief measures. In November 1845, the government spent £100,000 on buying grain from America, in the hope of keeping food prices down in Ireland. He appointed a relief commission which set about forming local committees to raise money and to distribute food. At Westminster, in part prompted by Ireland's problems, Peel succeeded in repealing the protectionist corn laws in June 1846. This opened up the prospect of cheap imports from America

Saint Patrick's day a great day for the world : why?

Millions of people around the world are wearing grey on that day. They drink green Guinness. From the Colosseum in Rome to hotel towers in Abu Dhabi, to Christ Redeemer  statue in Rio de Janeiro, EIFFEL tower in Paris, Sydney opera house in Australia, landmarks and buildings around the globe will be lit green in honour of the Irish. Waterways were dyed green and parades were held everywhere from Tokyo to Toronto over the weekend. How is it that a day originally meant to honour the patron saint of one small country has become a global phenomenon that celebrate all things Irish, marked by millions of people who don't have a trace of Irish blood? Yet Ireland culture and history are cause for worldwide merriment today. To understand why, one must look not to Emerald Isle, but to the United States. That 's where the version of St Patrick 's day is known and celebrated to day really has its roots. Originally, it was a religious event before Irish immigrants in the U.S. refined, repackaged, reimagined it,  as an American day. The result was then exported back to Ireland. The new St Patrick Day TRADITION HAS SPREAD AROUND THE WORLD; in the 17th century, marking the death of St Patrick, who is credited with spreading Christianity in Ireland. It was a sombre day when people would go to mas, not to the pubs, which were closed. Meanwhile, across the pond, Irish immigrants in the U.S. began their own St Patrick traditions in the 18th century. According to historians, a group of elite Irishmen first gathered for a celebratory dinner in Boston on March 17.1737;the parade tradition was born about 30 years later in New-YORK CITY in 1766 when Irish Catholic members of British army took to the streets. Not all Irish immigrants to U.S.were welcomed .they were characterised by some as drunken, violent and disease-carrying. The parades offers Irish-Americans an opportunity to show case their pride and cultural identity. As more immigrants arrived, they felt strength in numbers, and started climbing the social ladder, moving into positions of power in local police forces, for example, and commerce. Behind the parades, Irishmen were saying " We are here, we're not going away, and we are powerful."

Thanks a lot for writing Teilhard !
It is very interesting to understand why a religious feast day for the patron saint of Ireland has become an international festival celebrating Irish culture.
_________________

Saint Patrick's Day is a public holiday in the Republic of Ireland, Northern Ireland, the Canadian province of Newfoundland and Labrador, and the British Overseas Territory of Montserrat.

Every year, millions of people gather in bars and on the streets for St. Patrick's Day. While the 2020 edition has been cancelled, St Patrick's Day 2021 is taking place under special conditions due to the Covid-19 epidemic. Although the famous Dublin parade will not take place on Wednesday 17 March, festivities and broadcasts of shows are still expected in several major cities around the world.
_________________ 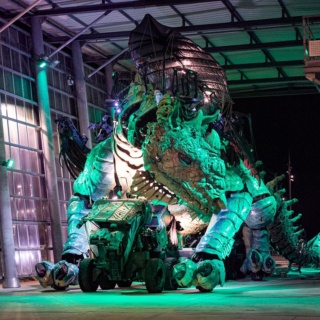 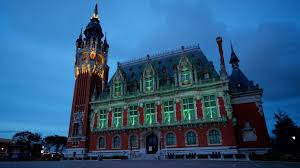