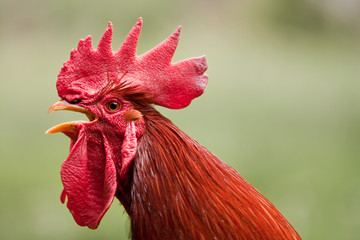 1. French is often "Un peu too much"
half their sentences are peppered with English.
2. Sometimes they go all Spanish
si instead of yes.
3. One word rules them all
Bonjour
“When you think you've said it too much, you're probably saying it just enough."
4. But they often prefer kisses to goodbye
5. You can say “Re-hello”
6. They don’t say “hon, hon, hon” when they laugh
7. But they do say "bon.... bon... bon" all the time
8. They have their own gestures like the "nose twist fist"
9. They have the best sounding swear word
The chances are that if you've spent any time in France you've heard the word 'putain' or "Puuuuuuutaaaaaaaaaaiiiiiiiiiin!"
10. They have really, really strong regional accents
11. They have their own sounds
For example they say "Beurk" for "yuck" and "Miam" for "Yum".
12. Cocorico! Of course it also makes sense that the French have their own animal sounds.
13. They don’t say Sacre blue!
14. You're either a "mec" or a "meuf
15. They speak a backwards language : Verlan
16. Mademoiselle isn't always acceptable
17. Do you really know how to say "Oui" properly?
18. There's a testicle in the soup
READ ALSO: French expressions for having sex they won't teach you at school
19. "It's not Ooooh laa laa".READ ALSO: Oh là là - How to really use the best three words in French20. They have their own text speak
MDR (LOL), MR6 (Merci), B1Sur (Biensur) are just a few of the abbreviated terms you can learn. But there are many more.
21. They have a load of shortened slang terms you can use
22. Don't be afraid to speak up because they will love your accent
We all love the sound of French people speaking English, but what you don’t realise until you get here is that the feeling is mutual.
23. Ouistiti!
The French say "Ouistiti" when they are taking a photograph

Hi everyone
when it comes to learning a language  you really have to be in the country to do it because there are many things they just don't teach you in school.I advise you to read attentively the 23 things you will discover while living in France. It's very funny and I enjoyed it !