Nowadays, Americans love silly jokes around mothers; they are know as "Yo mama jokes".
For example: "Yo momma's so stupid, she thought Sherlock Holmes was a housing project."
For example: "your mother is so ugly she makes americans feel good."

And so on and so forth, and so fifth.

Another one I like a lot:
"She's always late. Her ancestors arrived in America on the June Flower."
_________________
Please feel free to point out big mistakes in my messages in a foreign language. Thanks to your remarks, I'll be able to improve my level.
PS: Pls note that I chose American English for my vocabulary, grammar, spelling, culture, etc.


She was just a moonshiners daughter but I love her still.


Yo momma's so ugly, she gives Freddy Krueger a nightmare

Yo momma's so ugly, even Rice Krispies won't talk to her!


Yo momma's so stupid, she thought Fleetwood Mac was a new hamburger at McDonalds!


Yo momma's so stupid, she got hit by a cup and told cops she got mugged.


Yo momma's so stupid, she thought Sherlock Holmes was a housing project.


You totaled your car... and can't remember why... could it have been... that case of Bud Dry?


A US Border Patrol Agent catches an illegal alien in the bushes right by the border fence. He pulls him out and says, "Sorry, you know the law, you've got to go back across the border right now." The Mexican man pleads with him, "No, noooo, Senor, I must stay in de USA! Pleeeze!"
The border patrol agent thinks to himself, I'm going to make it hard for him, and says "OK, I'll let you stay if you can use three English words in a sentence."
The Mexican man of course agrees.
The Border Patrol Agent tells him, "The three words are: green, pink and yellow. Now use them in one sentence."
The Mexican man thinks really hard for about two minutes, then says, "Hmmm, OK. The phone, it went green, green, green... I pink it up, and sez yellow?"


Fred and his wife Edna went to the state fair every year. Every year Fred would say, "Edna, I'd like to ride in that there airplane." And every year Edna would say, "I know Fred, but that airplane ride costs ten dollars, and ten dollars is ten dollars."
One year Fred and Edna went to the fair and Fred said, "Edna, I'm 71 years old. If I don't ride that airplane this year I may never get another chance." Edna replied, "Fred that there airplane ride costs ten dollars, and ten dollars is ten dollars."
The pilot overheard them and said, "Folks, I'll make you a deal. I'll take you both up for a ride. If you can stay quiet for the entire ride and not say one word, I won't charge you, but if you say one word it's ten dollars."
Fred and Edna agreed and up they go. The pilot does all kinds of twists and turns, rolls and dives, but not a word is heard. He does all his tricks over again, but still not a word.
They land and the pilot turns to Fred, "By golly, I did everything I could think of to get you to yell out, but you didn't."
Fred replied, "Well, I was going to say something when Edna fell out of the plane, but ten dollars is ten dollars."


A Joke At Random


If at first you don't succeed, delegate it.

You can find more like this in the Office Humor category

I like the one about being late: coming with the Juneflower!!!

The American sense of humour is generally more slapstick than that in Britain. I think this arises from a cultural difference between the two. Their jokes are more obvious and forward, a bit like Americans themselves. British jokes, on the other hand, tend to be more subtle but with a dark or sarcastic undertone. There is usually a hidden meaning. This may stem from the fact that British culture is more reserved than American culture.

Yo momma's so stupid, she thought Fleetwood Mac was a new hamburger at McDonalds!

Yo momma's so stupid, she got hit by a cup and told cops she got mugged.

Yo momma's so ugly, she gives Freddy Krueger nightmares!

Yo momma's so ugly, even Rice Krispies won't talk to her!

DO YOU KNOW JOKES ABOUT THE FATHER?

So mothers are laughed at because they are either ugly or stupid , perhaps both.
It may be interesting to find some funny stories about the father too.

Actually, I am busy trying to understand Andrew Birds songs .
I got one if his album "NOBLE BEAST" out of the library.
I am fond of his music but find it rather hard to guess what he says.
Have to take it up again!

Yo daddy so fat he walked outside with a yellow jacket on and everyone yelled "Taxi!"

Yo daddy so dumb he ran into a park car.

Yo daddy is like a mounds bar - he's got no nuts.

Yo daddy so stupid I told him if he guess how many dollars are in my pocket I will give him both of them he said three.

Yo daddy so hairy, small children think he's a beast.

Yo daddy so bald, when I rub his head I can see the future.

-- Yo daddy so ugly, when he looked out the window the cops arrested him.

Yo daddy so short, he's always being mistaken for a midget!

Yo daddy so fat when he walks china has an earth quake.

Yo daddy so fat alaska said "I thought we were the biggest state."

Yo daddy so fat his parents had to take him to the Pacific Ocean to get him babticed.

Yo daddy so poor i saw him walking down the street kicking a cardboard box i asked what are you doing he said moving.

Yo daddy so old Jesus signed his yearbook.

Yo daddy so stupid he took a ruler to bed to see how long he slept.

Yo daddy so stupid he looked in the mirror and said someone's in the house.

Yo daddy so dumb when he jump the fence the gate was open.

Yo daddy so dumb, he went to the Bulls game and said which one am I riding.

Yo daddy hair so nappy Moses couldn't part it.

Yo daddy so corny, corn grew on his head!

In the first list you sent, please check on the word "dumb" ; (phrases 3 and last but 3). It doesn't make any sense, or do I miss anything ?

I don't think there is much to undersand because Dad is very stupid. He ran into a park car and wondered which bull he was riding. 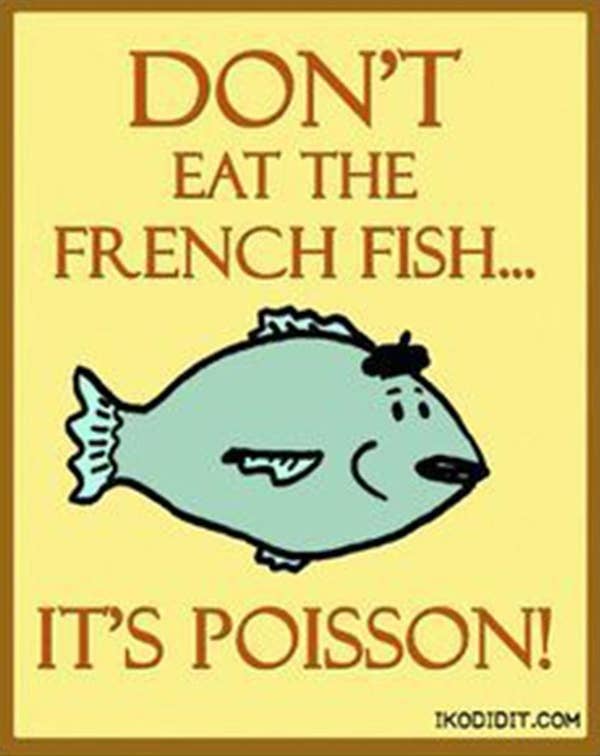 Good afternoon ! When people do not understand my jokes and ask for an explanation I say " You cannot reheat a soufflé. "

In the list of jokes the word "dumb " is used to mean stupid . It also means unable to speak as in " deaf and dumb " . I assume the first joke is he was so stupid he ran/drove into a parked car. i.e. he did not have an accident with a moving car. ( English say parked car - I do not know if " park car " is American or is just a mistake. )

The second " joke " was he went to a Bulls game and asked which bull was he riding . I assume " Bulls game " refers to the Chicago Bulls which is the nickname of a basketball team. You can ride bulls in a rodeo if you are intent on injuring something.

Stopping now to work on my next soufflé. johnB.

Sujets similaires
» English Humour
» English short jokes ... 4 fun!
» American Service
» The French have jokes. Do they have a sense of humour like the English ?
» American Fooding