Last year as I was spending a few days in Amsterdam I heard of an exhibition called Body Worlds. It rang a bell and I remembered that in France a few years ago a similar exhibition by Gunther Von Hagens was banned following the complaints and suing of two associations « Ensemble contre la peine de mort » and « Solidarité Chine ». Most of the real human bodies ( because it is what it is about) were those of Chinese people condemned to the death penalty and executed in China…
So do I really wanted to see that kind of exhibition ? Dr Von Hagen is best known for his plastination technique, which he invented in 1977 and allow to preserve whole body specimens . The first exhibition of whole bodies was displayed in Japan in 1995.
This year I jump over my prevention ( or disgust) and I visited the exhibition in Amsterdam under-titled « The Happiness Project ».
It’s a breathtaking exhibition showing bodies in lifelike poses and dissected to show various structures and systems of the human anatomy . It is at the same time an interactive exhibition telling the amazing story of our bodies, the influence that the emotional phenomenon of « happiness » has on our health and the complexity, resilience and vulnerability of the human body .
So because the bodies are skinned they don’t look like reals. It’s like the skinned anatomical figures we have been used to see in medical documentaries or science classes . What make them seem real ( or even lively ) is that they are showcased in lively poses ( the couple having sex is one of the most famous , but the athlete jumping is breathtaking too) and they have eyes staring at you, asking you something perhaps ….
Religious groups have objected to the display of humans remains, stating that’s it is inconsistent with reverence towards the human body.
I cannot say anything about this , I enjoyed the exhibition, I object death-penalty, and if the bodies have been bought illegally I am against this process. If I had children I would certainly go there with them, there are very interesting demonstrations about the need to care and protect our bodies, the link between bodies and happiness.
Recently Von Hagens announced that he was suffering from Parkinson’s disease and that after his death his wife would plastinate his body and put his preserved corpse on display as part as the Body World exhibitions …. I am sure this kind of exhibition will continue to meet public interest and controversy. And everyone has the right to enjoy it or to critizise it …

If I had children I would certainly go there with them, there are very interesting demonstrations about the need to care and protect our bodies, the link between bodies and happiness.

Thanks Jean-Pierre for that post. That exhibition is certainly very educational and I would very much understand the link between our health  and happiness.
_________________ 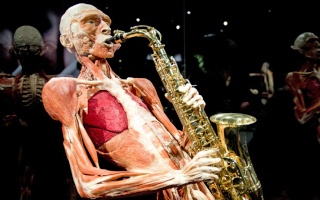 thank you for the picture Floran, I need a picture like that in order to convince people that this exhibition was not sad at all, as to know wether displaying human remains that way is consistent with reverence towards the human body, it is another matter.

What a strange idea going to Amsterdam seeing dead bodies. I prefer going to the café de Paris talking with alive bodies!

I don't understand the title of this exhibition "the happiness project" because when you are dead, you're not happy neighter unhappy, you're just ... dead! Or perhaps the author call this exposition for the visitor, how are happy to see dead bodies.
If I were the author, I'll call it "the disgusting project"

Hi Jean-Pierre ! Hi Florent !
From Florent's strong reaction we can see that such an exhibition cannot leave us indifferent ! Anyway a reflexion on death is also a reflexion on life.

Life is very precious and we have to take good care of what makes us lucky to be alive.
Thanks again for sharing your experience Jean-Pierre !
_________________